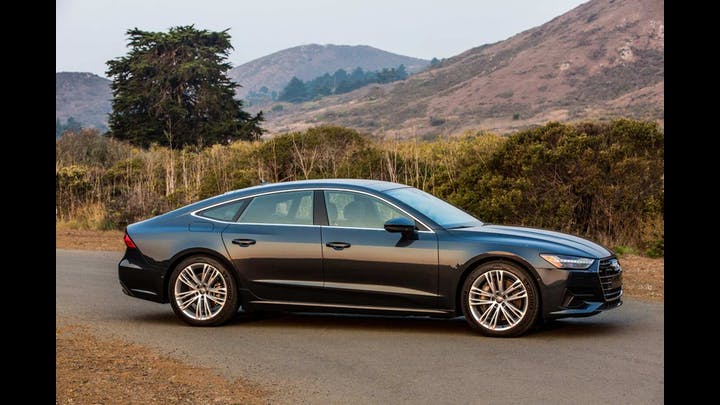 The Audi A7 is a luxurious sports sedan with a practical twist, with the German brand’s signature attention to detail and appealing style. The A7 is a hatchback that sits between the midsize A6 and the flagship A8, though it’s hidden beneath a sleek fastback roofline. Two hybrid engines with a combined output of 362 horsepower are available to drivers. The interior of the A7 is upholstered in soft leather and features seamlessly integrated technology.

As a daily driver, the Audi A7 is difficult to beat. When the urge strikes, it has plenty of power and tenacious all-wheel grip, making it a blast to drive. Aside from that, it’s perfectly content to float along highways and roads, its ride smooth and unruffled. The cabin is quiet and luxurious, with soft leather seats and cutting-edge driver technology. Audi’s dual-screen infotainment system is easy to use and provides a variety of multimedia and climate control options. A useful cargo hatch adds some versatility to the vehicle. True, the similarly equipped A6 is less expensive, but the A7 does everything just as well and with more style.

When you upgrade to the Premium Plus, the price jumps to around $75,000. A Bang & Olufsen surround-sound system, adaptive cruise control, lane-keep assist, a heated steering wheel, an overhead-view camera, and wireless smartphone charging are among the features.

The Prestige trim, which costs around $79,000 and comes with the A7’s coolest features, is at the top of the line. It comes with a head-up display that projects important driving and navigation information onto the windshield. Power-closing doors, acoustic glass, laser headlights, heated/cooled front seats, and heated rear seats are among the other features.

The Black Optic Package costs $1,000 and transforms the A7’s exterior. Black exterior accents, a lowered suspension, and 20-inch titanium-finish wheels are among the features.

The $3,000 Luxury Package adds premium leather to the seats, dashboard, and armrests, as well as massaging front seats with several spa programs, passenger-seat memory, and multi-adjustable front headrests to the interior.

The Audi A7 comes with two powertrain options: the 55 TFSI and the 55 TFSI e Plug-in Hybrid.

The 55 TFSI comes standard with a turbocharged 3.0-liter V6 engine that produces 335 horsepower and 369 pound-feet of torque. It employs mild hybrid technology to save energy and fuel, with regenerative braking and an innovative start-stop system directing energy back to an auxiliary battery system. A seven-speed automatic transmission provides sporty shifts and satisfying acceleration in the A7. An all-wheel-drive system provides traction on the ground.

The 55 TFSI e Plug-in-Hybrid is also available. It has a 2.0-liter turbo four-cylinder gas engine that is paired with an electric motor. The onboard 14.4-kWh battery can be charged at home or at a fast-charging station along the road. It improves the A7’s fuel economy and even allows it to travel short distances entirely on electricity.

The EPA estimates the A7’s overall fuel efficiency to be 24 mpg, with the Plug-in Hybrid delivering 29 mpg.

Simply put, the Audi A7’s interior is one of the best in the segment. It’s sleek, luxurious, and loaded with cutting-edge infotainment. With a futuristic dashboard swathed in piano-black trim and genuine wood inlays, Audi clearly took inspiration from the full-size A8 when designing the interior. Audi’s MMI infotainment software is simple to use and allows the driver to adjust a variety of vehicle systems and settings. It’s accessed through a stunning dual-screen setup, with one screen stacked on top of the other in a cascading fashion.

Front-seat passengers will appreciate the A7’s spacious cabin, which includes standard heated leather seats and optional air conditioning. Buyers can choose from a variety of interior color schemes. Valcona/Milano leather seats, as well as premium leather on the dashboard, center console, and armrests, are included with the Luxury Package.

The back seats have enough room as well, though not as much as less sporty competitors. Passengers can control their own temperature using a touch-sensitive interface built into the back of the center console. If the vehicle is equipped with seat heaters, this is also where they operate them. The backs of the front seats have net-style pockets, USB ports, and a folding center armrest.

The A7 has a cargo capacity of 13.4 cubic feet, which is quite large. That’s about the same as the A6 sedan, but the A7 has a power liftgate that elevates high in the air, making it easier to reach hard-to-reach goods. 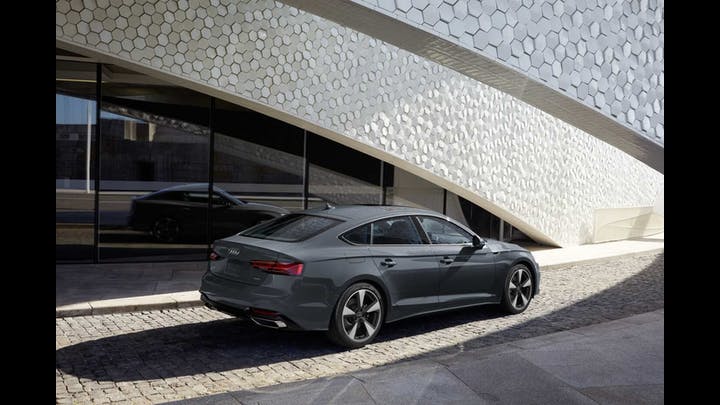